Something Christmassy on the soundtrack today, and I’ve delved deep back in the archives, back to 2004, when the quintet got together and we recorded some Christmas stuff, which has been sitting there on my hard drive more or …

Okay, they’re not really polyamorous. I know, I checked.

It’s been a wet week here in Victoria, so wherever you are, I hope you’ve managed to stay dry and safe.

I seem to be on about two gigs a …

Do I find it demeaning to play music at functions? Watch to find out.

It was a busy week last week. I had a few gigs on, and also a fair bit of work in schools. My school work …

So, the last update? Big success. We had a deluge of new subscribers. Seven flooded in. And that might not sound like much, but let me tell you: it’s an 800 percent increase.

I’ve had a couple of gigs …

I’ve been working behind the scenes getting a new website ready to launch, and starting to dip my toes more into social media (I could only hold out for so long, as it turns out).

I’m starting a series of …

At the start of May, we played in the River Room at Crown at a dinner for Deloitte Private to welcome their new partners. We started playing out in the foyer for canapes, and then moved into the River Room proper to play some swinging music behind the networking dinner. It's not clear in the video, but we were accompanied by the fireballs along the Yarra as we struck up our first tune, which made Ed's solo even more fiery than usual ....
Telstra in Melbourne enters a team each year in the One Ride fundraiser for the Juvenile Diabetes Research Foundation, and for several years now we've provided music for an auction before the ride, where members of the Telstra community come together to add some extra support for the cause. This year we took the quintet to the 31st floor of the Telstra building in Melbourne CBD, where the view provided a magnificent backdrop to the music and the mouth-watering cycling gear which was donated for the auction!
In April we journeyed down the Surf Coast to the hamlet of Moggs Creek where Suze and her family and friends had hired this beautiful beach house to celebrate a couple of special occasions. It was a pleasure to play in such a warm and friendly environment, and particularly to such a musically sophisticated audience!
On March 4th, the trio travelled up to Porepunkah in the lovely Ovens Valley to play for Bron's 50th birthday party. On a hot and steamy evening we set up our battery-powered bandstand in the shade of a walnut orchard by the river and provided the backdrop to a celebration that was relaxed and casual yet somehow magical.
On a lovely warm Saturday at the start of May, Peter and Gianni joined me in an acoustic trio to travel up to Echuca and play for Michelle and Jason's wedding. We performed some era-appropriate music on the wharf as guests arrived and mingled, and then we sat on the stern of the historic paddle steamer Pevensey for another few hours and entertained the guests as they (and we) enjoyed an idyllic cruise up and down the Murray River. The steamer didn't make it into the video, unfortunately, but you can hear it docking behind us during the last tune. 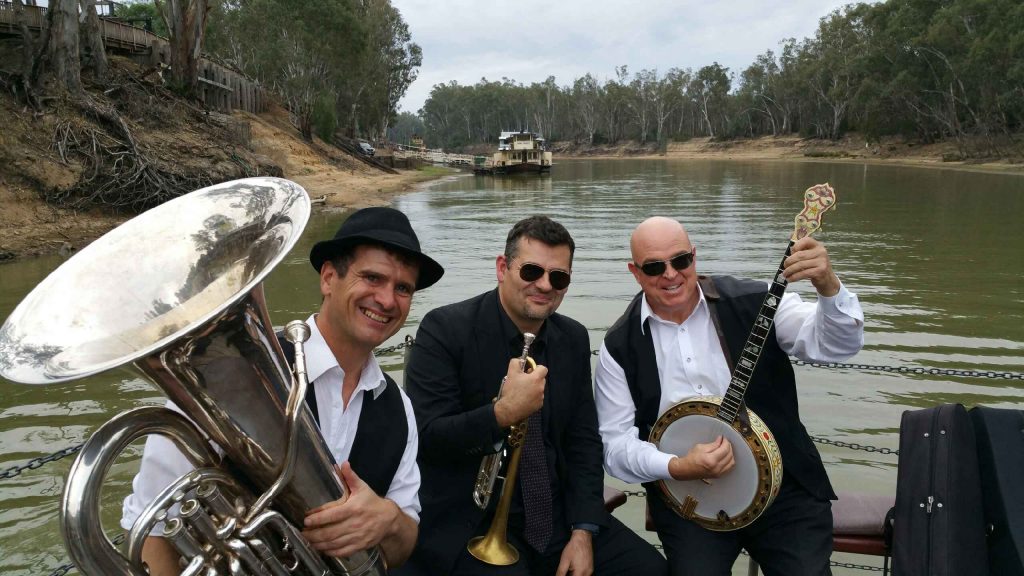